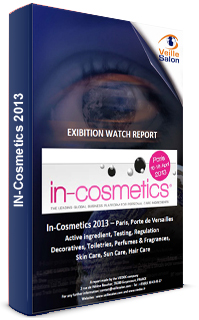 Abstract
The In-Cosmetics 2013 exhibition held in Paris on 16th  18th April, 2013, truly is the leading global business platform for personal care. Inside the In Cosmetics exposition, it was possible to see there is a clear trend toward natural products. There were lots of novel cosmetic oils from the Amazon, fragrant essential oils from Nepal, and Kampo traditional herbal skin formulas from Japan  all prepared in forms that make them ideal for use in cosmetic, skin and hair care products. Where once laboratory chemistry appeared to reign supreme, nature is re-establishing dominance  but with a strong scientific backup. Today’s portfolios of herbal ingredients come with dossiers of scientific substantiation, charts showing their chemistry, and even samples as examples of how these ingredients can be formulated into finished products. The French company Naturex is one of the leading companies in this natural trend for active ingredients. An additional strong theme at In Cosmetics is the demand for sustainability. The big cosmetic companies not only want their ingredients increasingly natural, but they are demanding sourcing that follows strict guidelines of ethical trade and environmental preservation. At In Cosmetics, what is old is new again. Plants of all kinds yield compounds that firm skin, reduce wrinkles, make hair shine, diminish cellulite, and enhance beauty in hundreds of ways. That means cleaner, safer cosmetic and body care products, less toxic waste, and perhaps even a healthier environment in the long run. Last but not least, in March 2013, European Union regulators announced a ban on the import and sale of cosmetics containing ingredients tested on animals and to pledge more efforts to push other parts of the world, like China, to accept alternatives. Even before the new rule was officially announced, the cosmetics company LOréal, which is based in France, said it would respect the ban and no longer sell in Europe any finished product with an ingredient that was tested on animals. This has a major impact on ingredient suppliers, which was promoted in vivo testing through clinical trials to prove how good their active ingredients are. Accordingly, new testing methods and new skin analysis imaging techniques were displayed in the exhibition. The French company Quantificare and its new 3D LifeViz Micro were quite impressive..