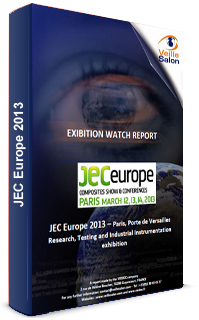 Abstract – JEC Europe 2013: The JEC Europe 2013 composite show, held in Paris on 11th  14th March, 2013, covered the sectors major topics: mass production, thermoplastics, smart composites with embedded sensors, new applications, the environment, and recycling. Clearly, the trend in the composite world is on large production, and most notably thermoplastics. The idea is to find more and more applications for cheaper thermoplastics, that can be handled efficiently through RTM processes. Indeed, it is estimated that the composites market will grow at an average annual global rate of 6%, to reach a value of about 90 billion and a volume of 10 million metric tons by 2015 (compared to 80 billion and 9.2 million MT in 2012).

However, there are still outstanding innovations for thermosetting materials, which are mostly based on faster curing ways. Henkel is pushing polyurethane resins to the detriment of epoxy resins, because polyurethane can be cured five times faster than epoxy. It should be interesting to see if polyurethane resins will become the standard materials for thermosetting material for RTM processes in the future. In terms of sectors, the automotive industry really brought it the next level in the JEC Europe 2013 exhibition show. There were numerous demonstrations that suppliers are perfectly able to keep up with the output demanded by the automotive industry, and 70% of the parts shown in the Exhibit Area were related to automotive transportation. The most impressive innovation came from BMW, which find a way to produce car body parts made of CFRP in less than 10 minutes for curing. This composite will be used in the mass produced electric car named BMW i3, which will feature an estimated sales price of 40 000 by November 2013 !

Thanks to register to see the report.