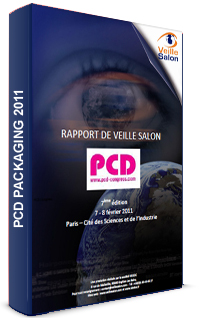 Abstract:
The last congress Perfume, Cosmetics and Design (PCD) was held in a very subdued at the Cité des Science et de l’Industrie in Paris on 8 and 9 February. For this seventh edition under the banner of innovation and sustainable development, the organizers had predicted a first morning as a workshop so as to promote exchanges among participants. Two other sessions, one devoted to perfume packaging and other packaging products to care and makeup products were then held and the ceremony came PCD Awards close the congress. Eco-design is a dimension that is finding its place in luxury goods with the provision by some actors of the packaging solutions that are both aesthetic in line with the brand image, and both more environmentally friendly. In marketing terms, it is clear that by offering packages to both eco-design and quality, brands enhance their image among consumers that they are able to meet their expectations for sustainable development while continuing to provide them with premium products… 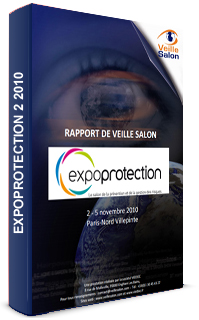 Abstract
Expoprotection, trade show dedicated to risk prevention and management was held from November 2 to 5 at Paris-Nord Villepinte. Despite the economic downturn, many exhibitors showcased new products and innovative solutions at this 2010 edition. An Innovation Forum had been organized, and Innovation Trophies were awarded highlighting major technology trends and main lines of evolution in risk prevention and management. As such, it is clear that the “eco” wave is no exception to this industry. Solutions that are more respectful of the environment and humans are emerging with cleaner and less toxic products. It is also interesting to note that the use of photovoltaic cells to supply clean energy to security devices can also overcome power cables providing modular and cheaper installation..

Thanks to register the report

After Google Reader, it is the turn of Yahoo Pipes!

You probably remember… It was July 2013, after 8 years of loyal service, Google Reader disappeared. A real bolt for the small world of CI professionals. If was followed by a wave for free replacement solutions and a real hunt for finding the most suitable overall.

Well, now it’s the turn of Yahoo Pipes to forfeit. By announcing its imminent death. In fact, if you use Yahoo Pipes, be aware that it will not be possible to create Pipes after August 30. The service will shut down for good after 30 September.

Remember, Yahoo! Pipes was a web application created by Yahoo! providing users a way to combine a set of RSS feeds (among other sources) just to create a custom, combined feed. It allowed to manipulate RSS feeds via filters, or playing with a combination of rules to extract only useful information in a single rss feed.

Enough to make a serious chill to all those who advocate the use of free tools!

Over the years, free applications for CI have become ubiquitous on the Web. They invaded forums, CI tools mapping and lists and each had their own tutorials generated by fans.

True, there is still a real business for trainers in CI that explains how to use them and combine them to get a truly professional CI suite. Some courses offers up to 5 separate CI applications just for performing the loop – that is, from surveillance to diffusion.

Indeed, often mono task and most of the time very intuitive, these tools have the merit to exist and to be (partly) free, yet they represent a significant investment in time and more or less high learning curve for appropriation. In addition, when one of these disappear (a brick or link in your CI process) disappears, it’s your entire CI methodology and “production line” that is shattered.

And if it was time to change your habits?

To go further, we invite you to read an article in December 2013 where we give some tips for choosing the right monitoring tool:
https://www.viedoc.fr/en/5-advices-to-choose-your-ci-tool/ 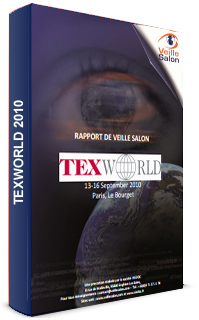 Abstract:
At Texworld Paris 2010 held between 13 and 16 September at Le Bourget, the vast majority of exhibitors came from Asia. Chinese suppliers were by far the most represented, and a Chinese pavilion with 17 selected companies was moreover organized. Companies supplying sustainable textiles were put forward and organized around eco-friendly raw materials, eco-friendly processes and social aspects. Texworld offers a vast variety of textiles including wool, cotton, linen, polyester, nylon and spandex fabrics in many different quality,colors and patterns. Amongst companies exhibiting at Texworld Paris 2010 in the technical textiles area, one could find cool fabrics, breathable fabrics but also bamboo charcoal added, germanium alloy added and jade mineral added fibers together with scented fabrics. For this latest edition, organizers invited fashion school Esmod and lAcadémie Internationale de Coupe de Paris, showing their will to make Texworld an all together international textile, apparel and fashion fair.

Thanks to register to read the report. 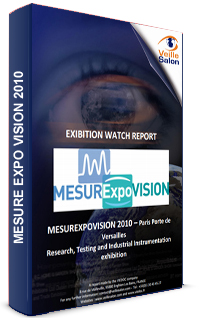 Abstract: For the first time, the two former exhibitions known as Mesurexpo and Vision show were merged to give birth to the Mesurexpovision 2010 show, which took in Paris Porte de Versailles on 1st  3rd of June. This event was indeed the place-to-be for professionals specialized on measurements, tests, modeling and vision solutions. In partnership with Aste, Cetim, Collège Français de Métrologie, Réseau Mesure du Val dOise and SFP Symop, the Mesurexpovision 2010 show highlights metrology and non-destructive testing, which are well represented among industrials concerns. In terms of key facts in this event, one should notice the great improvements made in tomography and in phased array techniques, which are now applicable in industrial context.. Read more about Mesure Expo Vision 2010 in a comprehensive report. 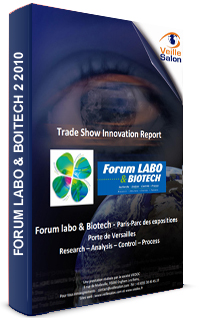 Abstract: During the Forum labo & Biotech 2010 in Paris Porte de Versailles, our visit focused on solutions for Biotechnologies, and physico-chemical analysis. The main innovations have been capitalized in this report. We noted: In the area of Biotechnologies: ? An automated cell counter offers a simple, rapid, and reproducible alternative to the hemocytometer. ? An advanced line of restriction enzymes for rapid DNA digestion, ? A Lab water purification system that combines contemporary design and performance for ultimate flexibility to make laboratory applications easier, ? A Novel Cell Culture Surface Improving the Cultivation and Differentiation of Embryonic Stem Cells ? A benchtop incubator and bioreactor hybrid capable of handling four independent and high density 3D cell cultures, ? Mobile Ductless fume hoods with modular filtration column, ? A preparative liquid chromatography system, incorporating cutting-edge functionality for achieving fast and secure process development In the physico-chemical analysis area: ? a poly range semi micro balance offering faster and more accurate weighing results for the lab ? Dialysis Cassettes facilitate simple and effective removal of buffer salts and small contaminants from proteins and other macromolecules that are larger than 7,000 daltons. 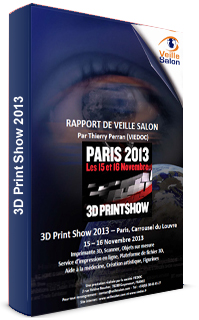 Abstract
3D Print Show 2013 took place on 15 and 16 November in Paris and judging by the crowd, it was a success. It is likely that the next edition will take place in a roomier place as it was difficult to move from one stand to another. Long reserved for the rapid prototyping and technology industries, 3D printing has recently democratized with the arrival on the market of cheaper and faster printers, and more varied selection of printable materials. There are now many companies offering printers and consumables at affordable prices. New services dedicated to 3D printing have also seen the day. Some companies offer such 3D print platform that users can customize themselves their files. The world of open source is also present and allows the social bond between craftsmen of a new kind. The show also gives pride of artistic creation through a fashion event within the event where jewelry, bags, shoes, glasses and other 3D printed accessories are on living display. The entire exhibition hall was also reserved for artists wishing to show and sell their creations. More ambitious side projects, 3D printing has huge potential in medicine, especially as it is now possible to print human tissue and bio-resorbable implants. 3D printing has already saved a newborn life choked and received a custom made “bronchial splint” by 3D printing at the University of Michigan. Finally, it was reported in 3D Print Show that the democratization of 3D printing would intellectual property considerations, especially in Europe where it is permitted to make personal copies…

Thanks to register to see the report 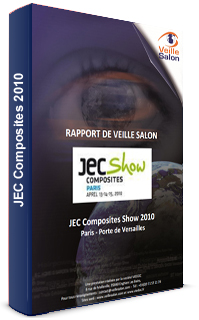 Abstract:
Composite materials are more and more in our everyday life. The lastest JEC Composite Show-Paris (13-15 april 2010) confirmed this tendency and their interest for industries in need for high tech materials such as aeronautics and automotive industries, but also for less demanding applications such as Packaging and Sports & Leisure. In this Veille Salon report, we talk about reinforcements, resins, intelligent composites and materials end of life. Sustainability and eco-conception matters are not forgotten since a large place is given to bio-based composites produced from renewable resources, showing that performing materials can also respect the environment.. 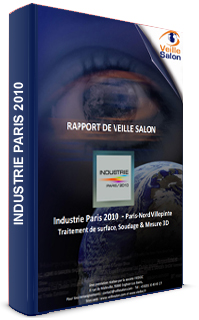 Abstract
During the show Paris Industrie 2010, with 10 separate areas, our visit focused on techniques and solutions for welding, surface treatments and coatings, and more selectively on Monitoring, Measurement, Quality. The main innovations have been capitalized in astonishment report. We noted: In the area of surface treatment: – The use of environmentally friendly and efficient media for stripping, – The possibility of making anti-corrosion clean by reducing the amount of organic solvents, – The ability to better manage the amount of paint for the paint shop In the welding area: – Improvement of mobile equipment welding (Lightweight, compactness, flexibility, customization, software range, scope of the torch) – Highly innovative systems for MIG / MAG (speed, flexibility, competitive prices, working conditions, …) and – Laser Cutting System with “fiber technology. In the “control, measurement, quality, – The automatic three dimensional measurement system without contact diameters and shapes of holes and bores. 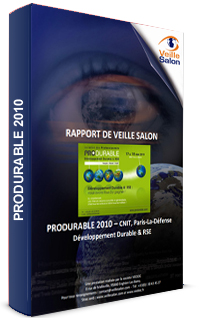 Abstract: Produrable 2010: The second edition of the PRODURABLE trade show held on 17 and 18 March 2010 at the CNIT, Paris La Défense, and the event was structured around the following themes: capitalism, CSR and Governance, Economic Growth and CO2, Green Social and Business. In this report Watch Fair, it will be eminently issues of technological innovations in the image of cleantech Clean water, lights and even power generation using biomass. It is also about service innovations through new philosophies of recycling as well as new diagnostic methods that optimize the balance between costs and carbon – – nutrition in the agricultural industry. This concept of balance has been raised many in the many conferences, because as we refine the estimates, we realize that we are heading towards ecological paradox. This is very good for the climate via the emission of CO2 is not necessarily good for the environment via waste created…